2005
Dry Cleaning is a multi-disciplinary work for two performers synthesizing performance, dance, and video. The project is a reinterpretation of the Orpheus and Eurydice myth projected through the lens of international espionage, encrypted correspondence, and disguise.

Thematic tropes from espionage cinema are drawn from such titles as ‘Alphaville,’ ‘Three Days Of The Condor,’ ‘The Spy Who Came In From The Cold,”The Third Man,’ and ‘Thunderball.’ These references become transparency templates, layered over the structural foundation of the Greek myth.     ‘Dry Cleaning’ uses writings of Marguerite Duras, Sigmund Freud, Andre Breton, Abbott and Costello and others to create elliptical dialogue for a multitude of characters.

The performance space is defined by a series of eight sliding panels that serve as portals to conceal and reveal the stage action and as video projection screens, allowing performers and digital imagery to occupy and interact within the same pictorial frame. The shape and function of the panels make these allusions:
-the open slits in early kinescope machines
-the iconostasis enclosing the altar in Greek Orthodox churches
-the characteristic columns prevalent in classical Greek architecture

The performance is highly-stylized with a movement score rooted in traditional Greek folk dance and Ancient Greek art and sculpture.”

The flyer design can be downloaded here

The press pack for this production will be available to download soon.
Backstage West

Without presuming to psychoanalyze the team of Richard Alger, Tina Kronis, and Jeff Webster, this world premiere collaboration has resulted in one of the most fascinating productions in recent memory.  This cloak-and-dagger take–the title refers to an espionage term–on the mythology of Orpheus and Eurydice is jaw-dropping performance art at its finest, as facets of traditional storytelling mingle with choreography and astonishing mixed-media effects.

A series of overlapping moveable panels, ably moved by crew members C.M. Gonzalez and Todd Silver, spans the stage. Photographic images, some still and some in motion, play across the infinitesimally varied screen combinations. Deserved kudos to
cinematographer Michael Glover and video designer Peter Flaherty, whose work
demonstrates flawless attention to detail. Performers Kronis and Alger appear on film and
transition seamlessly in and out of live scenes with almost magical virtuosity. Their execution of Kronis’ choreography, modern in origin yet humorously reminiscent of the Travolta-Thurman duet from Pulp Fiction, is top-notch.

As the story of two amorously connected spies, separated by a symbolic death or simple skulduggery, plays out, the two actors assume various  personas with the aid of Ellen McCartney’s array of muted film noir costume designs. Emphasizing a style of deadpan earnestness for his talented duo’s delivery, director Webster, whose multilayered sound
design is score-like in its intensity, augments his understated scene work with flashes of musical absurdity.

This piece requires a small amount of homework on the part of attendees. Without foreknowledge of the original tale, one might emerge mentally fogged. Take a few extra moments to bone up on the source material, ably provided via program notes; it will become apparent that this trio of creative minds pays homage to the Greeks. This engrossing invention dares one to join it out in left field for an hour-long romp of bizarre, sense-challenging imagery.

Theater Movement Bazaar’s retelling of the Orpheus myth is all about coming in from the cold and, in a McLuhanist sense, fittingly re- lies on the cool media of video to narrate its story. Co-creators Tina Kronis and Richard Alger portray two enigmatic figures inhabiting some Cold War of intrigue. They might be lovers, couriers or secret agents but, above all, they are a man and woman who are separated from one another. It is up to Alger, dressed in a suit, long coat and Fellini hat, to return Kronis to his world from captivity and, after an hour of
choreographed movement (designed by Kronis), he comes, shall we say, tantalizingly close to success.  Kronis and Alger interact with video projections (designed by Peter Flaherty of footage shot by Michael Glover) of themselves and of physical settings that appear on sliding panels, so that virtual doors open to let various characters pass, or provide them with halls to wander down. Dry Cleaning’s cynical joke-and-dagger milieu, as well as its vintage pop score, is familiar to any aficionado of 1960s spy films, with the actors speaking in deadpanned conversations of passwords and non sequiturs. While it’s difficult in Alger’s text to locate Dry Cleaning’s Greek source inspiration (or, for that matter, to readily recognize quotes attributed to Marguerite Duras, Sigmund Freud and others), the evening, ably directed by Jeff Webster, glides along on its own momentum, a flawless ballet of actors, video and erudite gags. Sometimes the show, which is so dependent on the
synchronization of technologies, seems to cutely wander down Wooster Street, but this remains a fresh and original work by a talented company.

Since 1997, Tina Kronis and Richard Alger have been blurring lines between art and theater, dance and speech, music and cinema. In “Dry
Cleaning,” their latest Theatre Movement Bazaar performance piece, this audacious duo raises its own stakes, refracting mediums into one
imposing organism.

Created in collaboration with 24th Street Theatre, “Dry Cleaning’s” title alludes to the inaction that spies observe when they know they  are under enemy scrutiny. This proves central to “Dry Cleaning,” which surveys the myth of Orpheus and Eurydice through a wry espionage spyglass.

It opens on a gray void, broken by Kronis’ projected eyes, followed by the edifice of the Hotel Cyprus (videos designed by Peter Flaherty). A woman (Kronis) looks warily out. A man (Alger) lounges in an adjoining bedroom. Director-production designer Jeff Webster’s sound goes from trance music to traffic noise, and an enigmatic exchange of encrypted intrigue begins.

Alger’s narrative traces Orpheus’ trip to Hades to retrieve his dead wife with witty interdisciplinary cohesion, the references ranging from “Alphaville” to Abbott and Costello. Webster, Flaherty and cinematographer Michael Glover negotiate the aperture-minded set and
Kronis’ choreography to create a holographic playing field. Ellen McCartney’s costumes take the disguise motif and run with it. Chris
Akerlind’s lighting meets every challenge of perspective.

As performers, Kronis and Alger operate in effortless tandem, her Callas-like intensity precisely attuned to his coiled deadpan energy.
Only the muted emotional tone softens the visceral impact. Still, “Dry Cleaning” is original, and its angular elegance is altogether
arresting.

“You’ve got a point.”
The above was written on a scrap of paper, slipped in with the admission ticket. The first of many clever and cryptic messages in Dry Cleaning, a multi-disciplinary theatre piece created by director and production designer, Jeff Webster, choreographer-performer, Tina Kronis and writer-performer, Richard Alger of 24th Street Theatre and Theatre Movement Bazaar.

Dry Cleaning is unlike anything else and to describe it risks the oversimplification of this complex, mysterious work. It is simply something one must see. It’s a thoughtful—and thought-provoking—fusion of performance, projected images, dance and sound.

The performers interact with each other as well as video images in a style reminiscent of Samuel Beckett and the Theatre of the Absurd. Eight sliding panels define the performance space, serving both as portals to conceal and reveal the stage action and as video projection screens, allowing performers and digital imagery to occupy and interact within the same pictorial frame.

The story, told in a non-linear fashion, according to Kronis and Alger, “is the re-interpretation of the Orpheus and Eurydice myth seen through the lens of international espionage and disguise.”

Dry Cleaning, in this context, is an espionage term referring to an agent’s obligatory daily period of inactivity while knowingly under surveillance. It is under this surveillance that the two players present the story of Orpheus, a gifted musician who traveled to Hades in an attempt to rescue his beloved from a cruel, early death. However, just as the pair were about to emerge out of the Underworld, Orpheus does the one thing he was forbidden to do—he turned around and looked at Eurydice and she was lost to him forever.

This Greek mythology serves as a foundation to this multi-layered play, with many intricacies throughout, most notably the adept dialogue and the inclusion of dance. Drawn from the writings of Marguerite Duras, Sigmund Freud, Andre Breton and Abbot & Costello, the elliptical dialogue is distilled and engineered into encrypted conversations so complex and intriguing, it leaves one wanting to see the play again to pick up everything missed the first time.

These encryptions are insightful and often humorous; they are simple exchanges which conceal complex reverberations. Additionally, the movement score is rooted in traditional Greek folk dance and statuary. It is unusual but befitting all at once and a pleasure to watch.

The on-stage action is mesmerizing as Kronis and Alger interact with one another as well as the projected images on the panels. Their performances are both intense and amusing, with seamless transitions between complete seriousness and the totally absurd. The design is purely brilliant.

Dry Cleaning is more than just a great play: it is a unique experience in modern art. The ingenuity and intense work of its creators, Webster, Kronis and Alger, is evident in every carefully planned-out moment, creating a production that is visually stunning and mentally stimulating. “You’ve got a point,” the scrap of paper promised. Dry Cleaning delivered.


The world premiere was presented Nov., 2005, by the 24th St. Theatre and Theatre Movement Bazaar 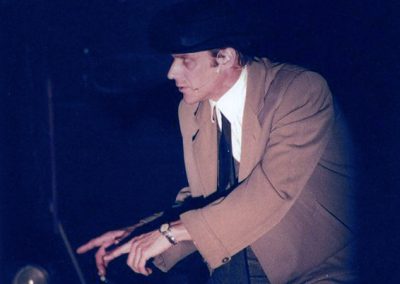 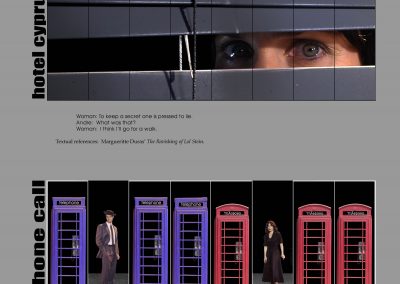