Monster of Happiness is a psycho-physical, science fiction love story based on the myth of Adam and Eve and examining a cornerstone of the American Dream: the pursuit of happiness.

In this work, the company pursues the 20th-century aesthetic innovations of early American modernist literature, Meyerhold’s Biomechanics, and post-revolution ‘Soviet-Style’ cinema. Integral to this process is a feedback loop, an invitation for the public (via the TMB web site) to provide personal views on happiness.

The project is created by TMB’s Tina Kronis and Richard Alger and co-produced by the 24th St. Theatre. It is being developed in several stages, the resulting material to be layered into the final production.

Supported in part by the Rockefeller Multi-Arts Production Fund, the Dept. of Cultural Affairs, City of Los Angeles, and the Durfee ARC Grant.

Program notes indicate this 70-minute piece “draws references from” such varied artistic and stylistic sources as Meyerhold’s biomechanics, the films of Kuleshov and Vertov, and photographic and graphic designs of Rodchenko, each used in service of the theme of finding a utopian ideal. The evening examines society’s pursuit of happiness, told through a loose version of the Bible story of Adam and Eve. But if one is unfamiliar with these elements — and, as it happens, without tools to critique their application here — what’s left for said audience member? Somehow, amazingly, the work’s abundant cerebral details can softly wash over us, leaving us feeling invigorated, enthralled, refreshed — in simpler words just plain happy. The thoughtful creativity, the crisp presentation, the awareness of but never pandering to the audience’s attention, a whimsy to balance the intelligence, and a reaching for the highest common denominator are thrilling.

Performed by Tina Kronis and Richard Alger, the “theatre” portion is written by Alger, directed and choreographed by Kronis. He plays “the man,” she “the woman,” but as general as those names are, their portrayals are deliciously specific. He offers up the dance of the happy man: part Hawaiian hula, part macho muscle flexing, part cheery get-up-and-move motion that looks casual but probably took hours of thought and rehearsal. She scuttles to get the man’s space set up; the tiny reverberations of her footsteps are as succulent as everything else in the pair’s sound design. She speaks with a wicked, somewhat South American accent. His monologues are delivered in a richly monotoned noir cadence. The performances, despite their high style, remain intimate throughout. The actors change costumes and prepare for entrances onstage — unlit, but there for those who care to watch the process of making art.

A bevy of wonderful local actors populates the “cinema” portions of the evening (directed and edited by Alger), done in the Soviet Style of the 1920s (cinematography by Michael Glover), the reviewing of which is better left to film mavens, but which to the untrained eye looks pointedly evocative.

A ‘Monster’ and Adam and Eve

Of the inalienable rights cited in the preamble to the Declaration of Independence, the pursuit of happiness might be the most vulnerable to subjective interpretation. That makes it perfect for Tina Kronis and Richard Alger, who turn this quest on its 21st-century head in “Monster of Happiness” at the 24th Street Theatre.

Using the Adam and Eve story to underpin its study of a Happy Man and Happy Woman whose inner thoughts emerge on the soundtrack, “Monster” combines the movement discipline of Meyerhold and the fluidity of the Soviet film constructivists.

That inspiration is detectable everywhere, including in designer Jeff Webster’s deceptively utilitarian set and the slew of effects from Chris Kuhl’s lighting. The desaturated film sequences, which feature a dizzying array of notable experimental artists, are remarkable.

As ever, Kronis and Alger — known as the Theatre Movement Bazaar — make a marvelous team, swanning about in Ellen McCartney’s deconstructed costumes. Spouting affirmations or segueing into a tango, Alger’s arch, aquiline presence is ideally coordinated with Kronis’ mesmeric blend of nonchalance and worry. Once their existential ping-pong game begins, all bets are off.

Actually, the brilliant execution slightly outstrips the content. All elements certainly achieve cohesion, but the scenario’s symbolism meanders a bit, with the lack of any clear serpent analogy a missed opportunity. Yet when Kronis leaves the stage with a rake to reappear on screen attacking grass, or when Alger dons glasses “to look slightly more intelligent than I am” and karate-chops an apple, it’s hard to resist “Monster,” a frequently breathtaking example of their kinesthetic ingenuity.

For a decade now, through their Theatre Movement Bazaar company, Tina Kronis and Richard Alger have been reveling in the cultural detritus of the 20th century — while earnestly sifting through its artifacts for meaning. This latest outing finds them searching for happiness — or, rather, exploring the gestures and mythology that the search for happiness creates. The pair portray a Happy Man and Happy Woman living in the American Eden, a couple dressed in an array of fragmented costumes (sleeveless suit coats for Alger, stitched-remnant dresses for Kronis). Their thoughts and conversations are broadcast as voice-overs — a disarming pastiche of self-improvement affirmations, philosophical texts and lines from such film noir classics as Crisscross and Out of the Past. Alger’s character is smugly self-contained while Kronis betrays cracks in her confidence and optimism. (“I gave up on time a long time ago,” she sighs.) The 75-minute show consists of repeated and often-ritualized scenarios that dance against a backdrop of film clips and within an interactive video landscape (both shot by Michael Glover). Although their immaculate orchestration of rear-screen video projections, music and choreography may remind viewers of such 1980s art pleasers as Laurie Anderson and George Coates, co-creators Kronis and Alger maintain a playful intimacy with their audience and a genuine — rather than ironical — affection for the past, especially Soviet Constructivism, whose celebratory cinema and graphics are lovingly imitated here. 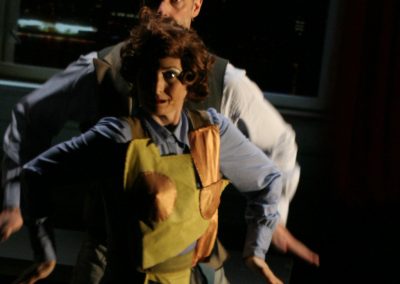 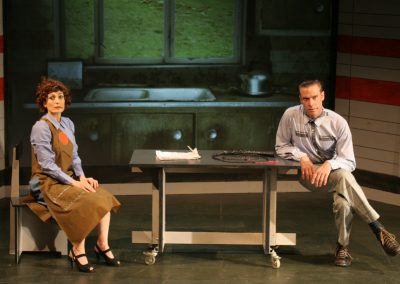