2018
Anton Chekhov’s unfinished early play is transfigured into a hilarious and moving tale of love and regret in this new Theatre Movement Bazaar adaptation produced by Los Angeles City College Theatre Academy. This new work pulls the source out of late 1800’s Russia — where class structures were breaking down and dramatic change approaching — and sets it in a summer home on the East Coast of the United States, early 1960s. Society is shifting and a younger generation is gaining resolve as the foundation of balanced optimism of the 1950s shows its cracks. The main characters’ existential crisis is shadowed by the crisis of the Cold War. Over the course of one evening, the high hopes for a party amongst friends plunges into chaos and betrayal in this stylized and dynamic new play. 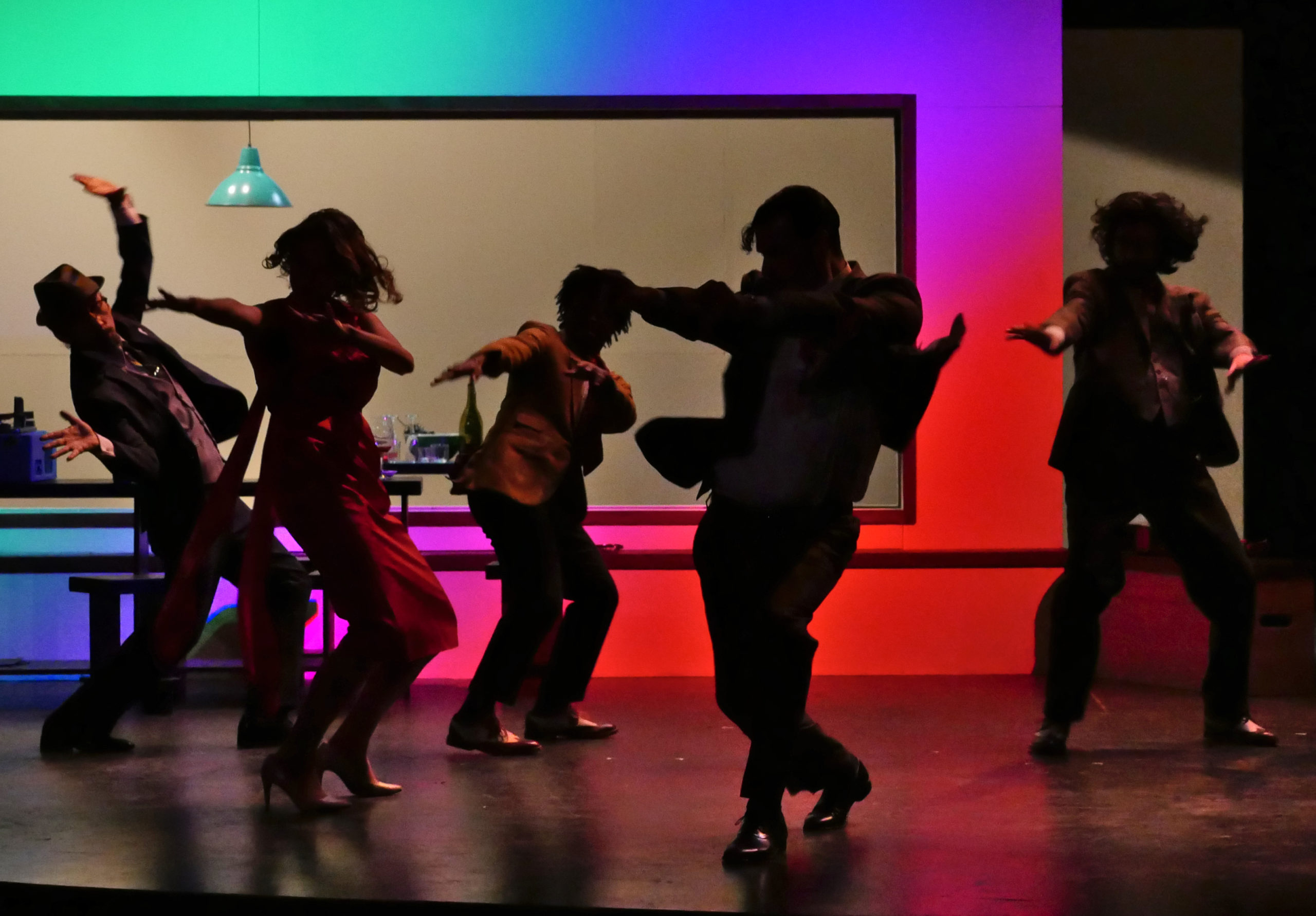 Dumbshow at the Sacred Fools Theater is a surreal and nonlinear piece that borrows freely from the works of Dostoevsky and Gogol to “examine the primal human impulse to gain the advantage.” That quote is taken directly from the press notes. However, feel free to interpolate your own meaning onto this bizarre but finely rendered show, which consists of a series of brief and tightly choreographed scenes set to eclectic music.   In the opening scene, the men and women of the large ensemble move hectically about the stage, coalescing into a large circle. They begin a playground clapping game, which evolves into a ring-around-the-rosy dance, which ends with them dashing around in a long line, crack-the-whip style.   Through it all, the actors maintain a joyless deadpan, an eerie juxtaposition to their childlike activities. The performers ambulate as if they are on tracks, rushing about the stage but never colliding. The ensemble quickly separates into recognizable groups.     Two male antagonists jockey continually for supremacy, brandishing their suit coats in a bantam-like plumage display.    Four men sit in a formal tableau, stirring their tea, then blowing bubbles through their “spoons.”   Three women move like synchronized wind-up dolls, offering such comments as “Men are still men, not piano keys.” Two other women cower in apparent terror, at one point donning white masks and gesticulating from behind a black curtain. A sole woman moves with dreamlike fluidity, inquiring, “Who do you think you are? The king of Spain?”   And so it goes, urgently, playfully, mysteriously. Creators Tina Kronis and Richard Alger (Kronis directs, with Alger assisting) are longtime collaborators who have recently worked with the famed performance/puppetry collective Mummenschanz. And indeed, a keen sense of whimsy underlies their rigorous, purposeful staging. So, too, does a sense of collective paranoia, the disturbing feeling that something dire awaits these participants at the end of their random, not-so-senseless rounds.

Dumbshow is a tightly choreographed and delightful theater piece, ostensibly about “getting the advantage” but seemingly more of a
whimsical dance about our regimented lives. Created by Tina Kronis and Richard Alger, it’s accompanied almost entirely by crackling, old phono recordings of accordian music or a small string combo. All of which fits perfectly on the stage’s slatted wooden floor and Victorian-era ambiance. The actors appear in three groups:
a pair of “comrades” (Peter Mattsson and John Wuchte) wobble their way into a duel; a “panel” of frock-coated, stuffy men (Aldrich Allen, Jay Harik, Corey Klemow and David LM Mcintyre) sit
rigidly side by side sipping tea. One gazes sneakily to the side at another, before tossing off an oblique line or two from Gogol, and we’re on to the next vignette. Finally, the gothic visage of “three
ladies” (Shirley Anderson, Kelley Justine Leathers and Michelle Phillippe) weaves though the event as though they’re attached at the hip, their faces glued into manic expressions. Snippets of text from
Gogol’s The Nose highlight the surreal fallacy of pushing ahead along a trajectory of logic, while excerpts from Dostoyevsky’s Notes From the Underground underscore our almost spiteful
determination to be anything but a cog — a blistering idea, given the stage pictures in front of us.

It could be Russian literature interpreted in a parallel universe. It could be our daily lives parsed and haphazardly reassembled a century ago. It could be pure theatre–from scripts to lighting–finely distilled. It could be a new form of mathematical equation: Text minus context equals twice the subtext. Or we could merely sit by this 50-minute stream and become hypnotized by its glistening patterns.   Created by Tina Kronis and Richard Alger, this production combines bits of text from classical Russians–Gogol, Dostoyevsky–with physical theatre that takes its movement vocabulary from nearly familiar human actions, accompanied by musical selections that are familiar by genre but in the main defy specific identification. Linguistic and kinesthetic non sequiturs become the impetus for further action. Uncomplicated answers are offered to questions never asked.   On the stage-within-a-stage set, the very upright Chekhovian characters move through counter-intuitive choreography, body language gone awry. Along nonsensical paths that get them where they’re going, they acknowledge, encourage, block, or propel one another. Simple items–cup, saucer, and spoon–offer simultaneous opportunities for power plays and teamwork. Meisner repetition exercises work perfectly as conversation.   Aldrich Allen, Jay Harik, Corey Klemow, and David LM Mcintyre could be pre-Politburocrats. Shirley Anderson, Kelley Justine Leathers, and Michelle Philippe could be the eponymous three sisters. Dean Jacobson, Majken J. Larsson, and Julie A. Lockhart could be artistes of the theatre. Crystal Keith crafts a haughty grande dame. Peter Mattsson and John Wuchte engage in a chummy, forgiving duel. All are attuned to their characters, crisply rehearsed, and extraordinarily focused onstage. Every bit of dialogue is given import without strain, every gesture is meaningful but not blatant. Those who momentarily recite in other languages leave the impression they are speaking ours.   Sometimes machine cogs in an alien society, the characters turn hostile and animalistic, then again become properly civilized beings, pinkies up as they drink tea. And if there must be an upshot here, the evening concludes by showing us it does take more than two to tango.

DUMBSHOW was produced in association with the Sacred Fools Theater and premiered on their stage.