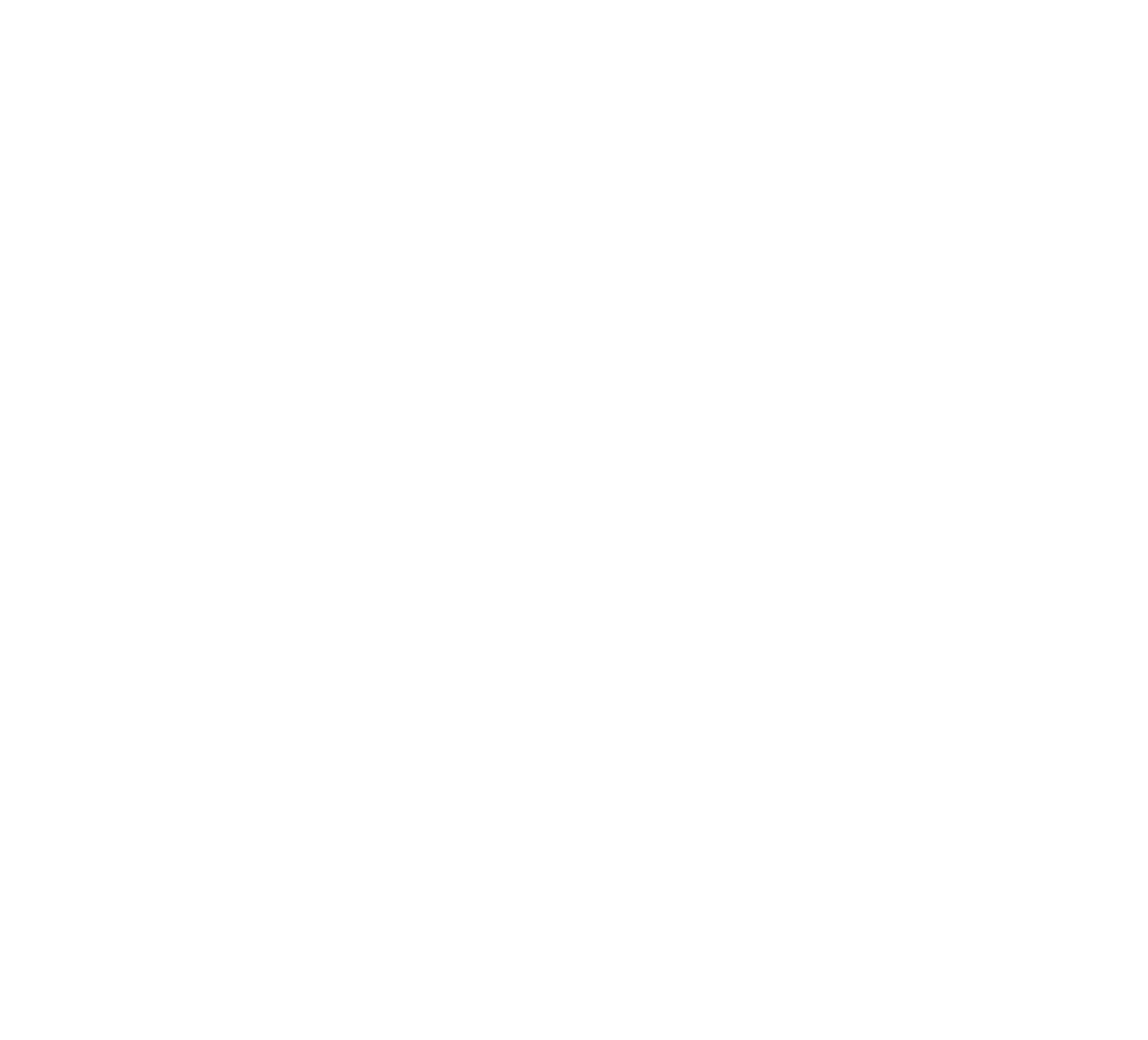 HOT CAT is an original performance work created by Theatre Movement Bazaar, featuring performers from Theatre of NOTE’s ensemble. Using a synthesis of dance and theatre — an orchestrated blend of comedic and dramatic expressionism — TMB creates an original and provocative theatrical experience inspired by Tennessee Williams’ CAT ON A HOT TIN ROOF.

HOT CAT explores the politics of family and the struggles for conformity within the tribe via TMB’s unique combination of text and movement.

The poster and flyer designs for this production will be available to download soon.

Thank god, Theatre Movement Bazaar has returned to the repressive sex roles of the 1950’s!
Okay, you need some background to appreciate how exciting that is. Stick with me.
Theatre Movement Bazaar is one of LA’s most formally daring companies blending the worlds of dance and theater. Their current piece at Theatre of Note, Hot Cat, is a riff on Tennessee Williams’ Cat on a Hot Tin Roof.
The brainchild of Tina Kronis and Richard Alger, Theatre Movement Bazaar skips across the boundaries of linear narrative and naturalistic movement into a world where idiosyncratic gesture becomes the building blocks of dance and a character’s text is as likely to come from a cultural footnote or found text. The glue that keeps the work coherent and entertaining is a mixture of wicked literary intelligence and a wonderfully dry physical wit.
For the last 14 years, they’ve nomadically created work with Sacred Fools, 24th Street, Boston Court, CalArts and LA City College – to name just a few — which shines a light on one of the economic realities of LA theater. The expectation would be that theater artists with a bold vision and work that requires both stylistic chops and physical dexterity would form an ensemble, a company. But small theater ticket sales in LA and the folks who fund it just don’t support that ambition. So instead, Theatre Movement Bazaar has woven together an existence bouncing from artistic home to artistic home. It’s a bargain that has kept the work fresh but comes with trade-offs.
Thematically, Ms. Kronis and Mr. Alger have spent the last few years in a sort self-imposed Russian exile, creating four plays based on the work of Anton Chekhov. With the exception of the Anton’s Uncles, which drew on Uncle Vanya, the pieces never really gelled.
Their current production, Hot Cat, returns them to the 1950’s, the fertile ground of their earlier works, Cirque Picnique and Monster of Happiness. Ms. Kronis and Mr. Alger find as much inspiration pressing against the repressive and ridiculous gender roles of the time as they do breaking the formal boundaries of the theater. They’re at their best when they physically distill or explode the source text creating new and unexpected resonances. In Hot Cat, the sibling rivalry between Brick and his older brother, the transition between athletic prowess on the football field to sexual prowess providing an heir, is captured in an inspired sequence when a series of baby dolls are ‘snapped’ football style. The repressive southern heat is evoked by a dance of those uncomfortable gestures each of us employ to escape sweat.
The most poignant choreography is the final pas de deux between Maggie and Brick. In a piece deeply evocative of the work of choreographer Pina Bausch, Ms. Kronis captures the ballet of dependence, love and failure that bonds Williams’ troubled couple. It’s magical and an exciting next step for the company.
If you’re a fan of the formally daring and witty – you need to see this.

Throughout its first half, this production is a fun and intellectual reworking of Tennessee Williams’s Cat on a Hot Tin Roof. Where Williams “told” us, writer Richard Alger and director-choreographer Tina Kronis “show” us. Where in Williams’s version the childless Maggie, speaking to her husband, Brick, bewails the number of children his brother Gooper and sister-in-law Mae have produced in their sports-loving family, in this version Mae plays center to Gooper’s quarterback and snaps out the no-neck monsters, er, baby dolls, in quick succession. Where Maggie complains about the twee performances those kids put on at family gatherings, here Mae and Gooper are classic stage parents, their bodies urging and acting out the show as they watch the progeny they hope will inherit the family estate of Big Daddy and Big Mama.

The dialogue could be Williams’s. Hot buttered biscuits earn a poetic description. And then biscuits get hurled in a thoroughly choreographed food fight followed by a thoroughly choreographed cleanup. Brick, accompanying himself on guitar, sings an impassioned ode to the “click” in his head. The performers do a physicalized ode to heat, some of it jocularly theatrical clichés, some of it unexpected yet descriptive movement, and some of it genuine sweating by the nonstop troupe.
No 1950s realism here. The actors go all out for Kronis’s stylized movement and delivery. Crystal Diaz is a fiercely feline Maggie, and David Guerra wields Brick’s crutch as a fifth limb while he ensures the label on the Southern Comfort bottle always faces the audience. David LM McIntyre is the highly cheery, people-pleasing Gooper, and Jenny Soo is the smug Mae. Eric Neil Gutierrez, despite relative lack of age and girth, is a shadow-casting Big Daddy, and Blaire Chandler heads straight for 1950s screen queen as Big Mama.
Yes, that’s the first impression—of tremendously amusing style but little substance. Where’s the grip in the gut normally felt at a Williams play? And then it happens, without announcement, creeping in on its cat paws. It seems to occur during what would be the Act II scene in which Brick undergoes what Williams described as “virtual vivisection” at the hands of Big Daddy. Alger and Kronis have not abandoned their comedic take (Brick’s pal Skipper may be a, gasp, communist) nor their whimsy (Maggie delivers comfort via an arrow laced with morphine). But the theater magic Kronis and Alger bring to the stage has suddenly enriched the story with almost overwhelming emotionality. The longed-for wrench of a Williams play has been provided. Indeed, this remantling of the classic might have out-Williamsed Williams. 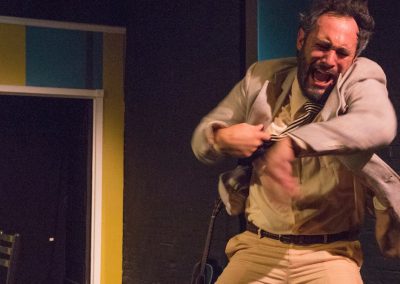 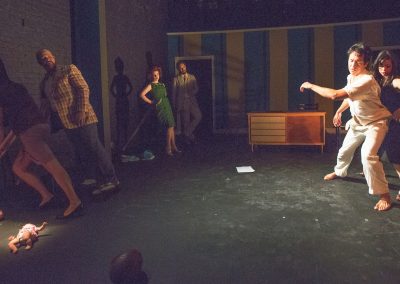 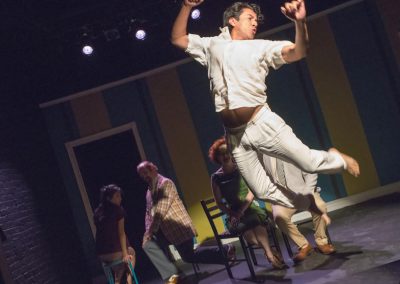 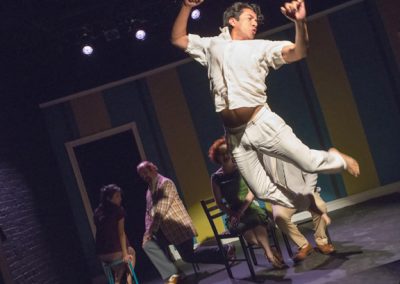