Model Behavior: In this collision of dance, theatre, and song, TMB creates an adaptation of Robert Louis Stevenson’s iconic story, “The Strange Case of Dr. Jekyll and Mr. Hyde”.

This production is done in collaboration with the 24th St. Theatre and with the generous support of the City of Los Angeles Department of Cultural Affairs, REDCAT, the Durfee Foundation and UCLA’s HotHouse program.

GO!! A play played at right angles” might be an apt description of Richard Alger’s reimagination of Robert Louis Stevenson’s The Strange Case of Dr. Jekyll and Mr. Hyde. Masterfully choreographed and directed by Tina Kronis, an ensemble of 11 performers, in their own words, “shreds” the story into a movement-based, bare-bones series of scenes punctuated by musical numbers. The action follows London lawyer Mr. Utterson (Jake Eberle), as he investigates strange occurrences between his old friend Dr. Jekyll (Jacob Sidney), and the misanthropic Mr. Hyde, who is first discovered by Utterson’s acquaintance Mr. Enfield (Jonathan Green). Utterson is aided by reports from Jekyll’s butler, Mr. Poole (Mark Skeens), and his domestic staff, as well as by Dr. Lanyon (David LM McIntyre), to whom Jekyll reveals his split personality. The performers, dressed in period attire but barefoot, remind one of the ensembles behind avant-garde works of the 1960s like The Serpent or modern incarnations like The Wooster Group. Christopher Kuhl’s dynamic lighting, which compensates for the almost non-existent set, emphasizes Kronis’ precise direction and 90-degree choreography. The cast shines in its exacting execution of Kronis’ minimalist vision, proving Mr. Utterson’s observation that “never is a reflection more thoroughly itself than when it is nothing.

There is much to celebrate about REDCAT’s annual New Original Works Festival, which opened its three-week, three-program run Thursday. To begin with, there is a fair amount of assurance by now that, after five years, the festival’s selections, chosen out of a pool of more than 100 applicants, will more than reward one’s sense of adventure.

And, as the first program amply demonstrates, the work may be fresh out of the box but the phrase “under construction” is hardly apt.

Concluding the evening with a bang — and a snarl and arched eyebrow — “Model Behavior, i.e., the Strange Case of Dr. Jekyll and Mr. Hyde” demonstrates why Theatre Movement Bazaar is heralded as a gold standard in the peculiar genre of wry literary remakes. Here, Robert Louis Stevenson’s classic is treated less as a morality tale than as a treatise on modes of social conduct and proper class and gender behavior, circa the Victorian era.

Though missing the troupe’s frequent use of cinematic projections and only half its intended length, the piece, led by Jacob Sidney as Dr. Jekyll/Mr. nevertheless capitalizes on Richard Alger’s pithy, swift banter and the deft direction and choreography of Tina Kronis, who puts the members of the ensemble in almost continual orbit around one another.

Chorus numbers on period manners and mores, wince-worthy jokes, and magic tricks are provided by a stellar cast. 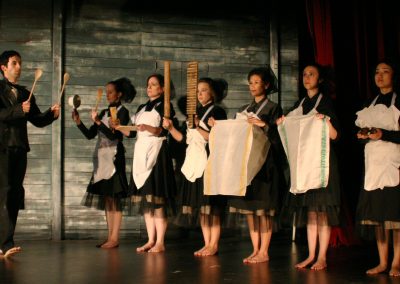 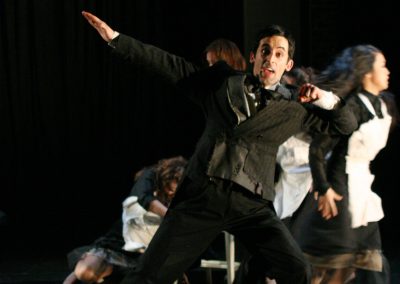