Using the writings and life of August Strindberg as a starting point, this production conforms with the writer’s  rigorous examination into obsessions, beliefs, and relationships. His varied fields of interest led us to chemistry texts, magic-trick instructions, Darwinism, and the Wild West. The resulting language and choreographed psycho-physical movement score implicate the performers in a shared state of compulsion. It simulates a reconnection of the mind/body experience, and in that, a formal yet abstract communication with others.

Strange Beliefs was produced in association with the Sacred Fools Theater and premiered on their stage.

The press pack for this production will be available to download soon.
LA Weekly
Pick of the Week

On opposing sides of an expansive performance space, one line of women and one of men, dressed in early-20th-century Western apparel, slowly approach each other in gloom — starting, halting and starting again to the strains of almost familiar music. Immediately, a sense of antagonism between the sexes fuses with an equally powerful scent of the erotic — themes August Strindberg confronted throughout his life as a playwright, novelist and lover/hater of women. Strindberg’s writings are the inspiration for this astonishing work of performance art in which director-choreographer Tina Kronis
mellifluously animates 16 accomplished performers through a rapidly transforming series of stylized human tableaux, ranging from tragic to bawdy to the outlandishly absurd. Strindberg’s texts as arranged
by Richard Alger provide emotional clues but never establish a narrative through-line — the words blend with an exquisitely eclectic soundtrack that moves seamlessly between big-band music and heavily rhythmic contemporary sounds. Themes of obsession run throughout — whether fixations on the proper way to do the smallest things in life, or compulsions to engage in the most grotesque behaviors. Not a moment is wasted in what seems to be a masterpiece, with nary a visual nor aural flaw.

Talk about Strange. Strange Beliefs, the new play by Richard Alger and Tina Kronis is credited as being suggested by the writings of August Strindberg, the Swedish born author of the late 1800’s. Strindberg was an avid writer, and experimented with different ideas and concepts including the occult, dreams and death.
In the short foreword to “A Dream Play”, Strindberg explained his intention with the play: “In this dream play, the author has, as in his former dream play, “To Damascus”, attempted to imitate the inconsequent yet transparently logical shape of a dream.  Everything can happen, everything is possible and probable. Time and place do not exist; on an insignificant basis of reality , the imagination spins, weaving new patterns; a mixture of memories, experiences, free fancies, incongruities and
improvisations.
The characters split, double, multiply, evaporate, condense, disperse, assemble. But one consciousness rules over them all, that of the dreamer; for him there are no secrets, no scruples, no laws. He neither acquits nor condemns, but merely relates; and, just as a dream is more often painful than happy, so an undertone of melancholy and of pity for all mortal beings accompanies this flickering tale.”
Fast forward to the Sacred Fools, and Strange Beliefs and if you’ve read Strindberg, you’ll see how bits and pieces of his ideas fit it all over, in this completely surreal presentation that keeps you nailed to the seat every minute.
Time and space seem absent from the sixteen players who frequent the stage, sometimes two at a time, sometimes four, and once in a while more. The eight men and eight women are divided in subgroups, and each time a group appears, they are preoccupied with their particular theme, sometimes prancing, sometimes doing dance, often walking in deliberate skewed steps, and when they have their say, they disappear and a different group comes on. It’s a little like a theme with variations, and each variable gets more bent than the one before.
The playbill states that this is “non-narrative physical comedy of the absurd”. That is so NOT true!. Don’t get us wrong – it is non-narrative, in that there is no plot that has a beginning, middle or end. It is physical, since there is a lot of movement – dancing, bodies in transit here and there. It’s the absurd that we quarrel with. This is so far beyond the envelope that it begins to make sense! If you watch and listen carefully, you see there is a great deal of truth being acted here . . . even if it is camouflaged under the guise of absurdity.
The actors are completely into their character – whatever that character is, and we willingly let our beliefs and sense of logic go along for the ride, which they provide more than willingly. Sit back, and let the flow of the actions and movement take you into their strange world, and before long, you’ll see it’s not all that strange and bizarre. In fact, it’s the world outside the theatre that will seem different after the performance. When you meet people, you’ll wonder where they got their strange beliefs.

When Tina Kronis refers to Strange Beliefs co-creator Richard Alger as a “text amalgamator,” you can tell we’ve left Neil Simon territory far behind. While their latest production begins with Swedish playwright August Strindberg as its leaping-off point, this is not likely to be your show if you’re
looking for biography, hagiography, or a vivid discussion of Miss Julie, for that matter.
The uniquely non-linear approach Kronis and Alger bring to their productions leaves audiences thrilled and nonplussed. Their previous outing, Cirque Picnique, which began with William Inge’s Picnic and
then went wandering far afield into Betty Crocker recipes and HUAC hearings, left the audience members the night I attended looking at one another trying to figure out if it was over or if the raised house lights were simply another unexpected element of the production. When I rather abashedly
admitted this to Kronis, she assured me that it was perfectly OK as the piece wasn’t, in fact, over. It’s never over. Kronis and Alger don’t set out to deliver a nice, neatly wrapped package to the audience.
What they strive for is the unique, the memorable, the resonant.
Strindberg caught the attention of the co-creators because he was, some say, one of the first truly modern playwrights, others saying he was either 50 years behind the times or 100 years ahead of them. It’s not just his writing, but also his life that intrigued. He was interested in alchemy and mysticism (the strange beliefs of the title) and also had a disconcerting habit of marrying strong women and then trying to turn them into his mother. Thus the production will feature chemistry texts, personal correspondence, and reviews of Strindberg’s plays in the mix, along with God only knows what else.
As the pair explained it, the process always begins with the text and then just follows as one thing leads to another. The result is a massive “keep pile” which Kronis and Alger whittle away at until they have a workable amount of material. The text is then lifted completely out of context to render it idea- and gender-neutral and then rearranged according to rhythms and juxtapositions that please the creators. From this arrangement spring images and a whole movement vocabulary, derived from Kronis’ training in dance, mime, clowning, and at the Moscow Art Theatre. The way an actor negotiates space, Kronis said she finds, can change everything. To her, choreography and direction are inseparable: It is through the physical that the emotional can be discovered, the body is the story.
By the time the work goes into rehearsal, Kronis and Alger may not yet know exactly what the production will be, but they have a definite map so that if they get lost they’ll at least know where they got lost from. Text might yet be rearranged, and actors will be assigned according to what they can bring to the piece. As the actors are frequently the same from show to show (this one includes Aldrich Allen, Shirley Anderson, Melina Bielefelt, Tom Chalmers, Jake Eberle, Aaron Francis, Crystal Keith, Corey Klemow, Majken Larsson, Julie A. Lockhart, Peter Mattsson, David LM McIntyre, Michelle Philippe, Pogo Saito, Kim Weild, and John Wuchte), the creators said they will occasionally add a scene to take advantage of a particular
performer’s strengths in a way that will add to the flow of the production. Kronis, noting the damp, panicked look I take on when faced with complexity, likened the process to raising a sheep: You have this big ungainly sheep and the sheep generates useful wool, which is removed and separated and carded and spun, and there’s no way when looking at the source material to know what you’ll end up with. The actors end up being the final threads, she explained, each unique in color and texture, woven together to form an artistically pleasing whole, a singular piece of fabric.
If I can now belabor this metaphor beyond all reason, the dyers will be working in earth tones and the cutters will be working under orders from the costumers at Gunsmoke. Kronis and Alger want to give the piece a Wild West flavor as a way of exploring the maverick quality of the madcap Swede. As
Strindberg was born the year of the Gold Rush and died the year the Titanic went down (1849-1912), his life was contemporary with that surprisingly short period we think of as the gunslinging,
every-man-his-own-law Old West. It’s not just the mores but also the physicality of the frontier culture toward which Kronis gravitates.
If you’ve never seen the work of Kronis and Alger, be prepared to see something utterly original. Pre-conceived notions will need to be left at the door, as Kronis is out to “resonate with someone on some level but not in a conditioned trope.” If the lack of a coherent story makes you uncomfortable, that’s fine. The creators only wants that each audience member makes a personal connection to
whatever parts float by that capture the viewer. It makes its demands, but if you’re going
after something worth doing, Kronis said, “Don’t take the easiest path, take the hardest. 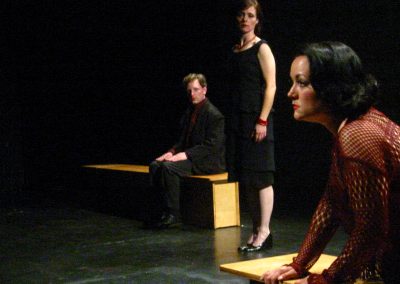 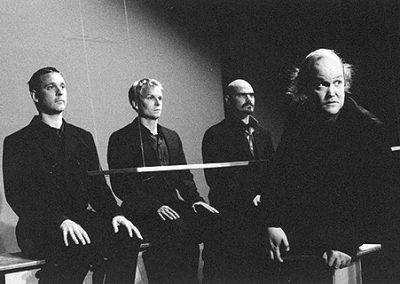 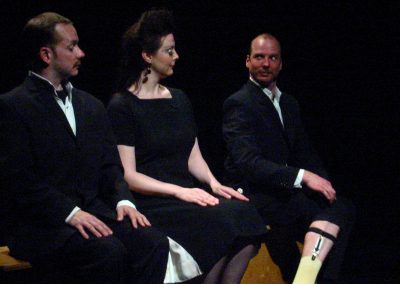