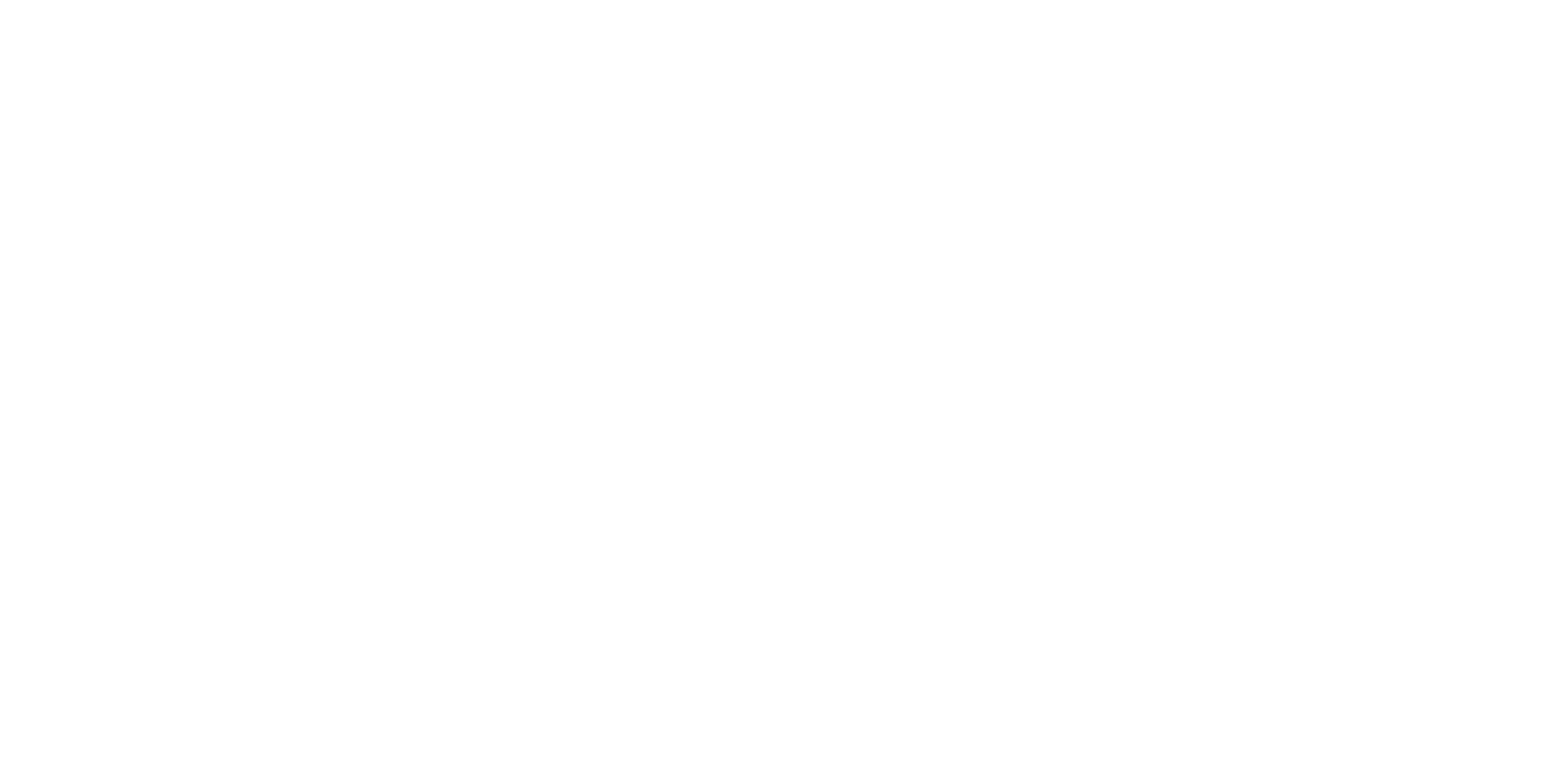 Who draws the line between sanity and insanity? In this new work of visceral, movement-based storytelling, a complacent doctor’s worldview is upended when he befriends a philosophizing madman in a remote and neglected metal hospital.  Chekhov’s investigation of people in positions of power and those they hold captive ignites with intense physicality fused with ironic humor, dance, and song.

The Treatment is TMB’s new adaptation of Anton Chekhov’s short story, Ward 6, presented in collaboration with The [email protected] Court.

In this world premiere, two audacious theater companies join forces to create a playfully imaginative spin on “Ward 6,” one of the lesser-known short stories by renowned Russian writer Anton Chekhov, penned in 1892. The age-old question of who is sane-those diagnosed as such or those passing judgment on them-has often been explored, yet there’s nothing about this inspired experimental endeavor that could be considered derivative or conventional.

True to the unique brand of dramaturgy for which Theatre Movement Bazaar is known, stylized movement, choreography, and song interludes drive the highly visceral production, creating a distancing effect that feels like a ramped-up variation of the concepts pioneered by Bertolt Brecht. The acting ensemble’s well-honed physicality and superb characterizations and the inventive visual and aural elements are impressive, though coherent storytelling occasionally feels secondary to hyperkinetic action.

In a dilapidated and highly dysfunctional institution, longtime superintendent Dr. Ragin, who hates the sight of blood and considers perceptions of pain to be “an opinion,” has become disillusioned and shows little interest in curing the patients. A severely paranoid yet highly intelligent inmate, Gromov (the terrific Skeens), sparks Ragin’s interest, and the doctor begins to visit him regularly. Local officials decide that Ragin is incompetent and conspire to incarcerate him. This adaptation deftly conveys Chekov’s thoughtful themes of individuality versus abstract philosophies and the gross failure of governmental institutions to serve the public.

Except for Mark Doerr, who plays Ragin, the actors (Jake Eberle, Nich Kauffman, Matt Shea, Jacob Sidney, and Mark Skeens) take multiple roles, and the versatile company excels in shifting among them. Their grace and precision in performing bits of unison business are remarkable, and they master the vanishing art of vaudevillian humor with panache. While this one-of-a-kind production isn’t likely to please audiences resistant to unorthodox fare, it affords adventurous viewers with a vibrant new take on the work of a literary master.

You don’t expect to laugh at Anton Chekov’s short story “Ward 6″–particularly if you’ve seen the recent movie “Ward No. 6,” but you also don’t expect a bit of Grouch Marx, “American Idol” and the CIA, NBA, NFL and KBG. Richard Alger’s adaptation is far from traditional, but you expect this, right? It’s Boston Court in Pasadena.

Don’t worry. Alger hasn’t Disneyfied Chekov and given us a happy ending. There’s plenty of tragedy and the play still erases the fine line between the sane and insane. Yet with all the roles played by men, the asymmetrical and sometimes only half there costumes by Ellen McCartney and the expressive ensemble choreography and direction by Tina Kronis, “The Treatment” brings kooky to crazy.

The basic story is Dr. Ragin (Mark Doerr) works at a much-neglected district hospital. Slowly, he begins to drink more and go to work less. His only friend in the village is the local postman (Jake Eberle) who he finds a bit boorish and will eventually lead to his ruin. In the mental ward, Ragin becomes intrigued by a particular inmate (Mark Skeens). And in time, Ragin is seduced by the feverish rantings of the inmate and finds the reality of his outside life dimming, dull and worthless.

Presented in collaboration with Theatre Movement Bazaar, this Boston Court world premiere is part vaudeville, part crew jam and part prose jam session. This is where live theater is fun and fascinating. Movies couldn’t do this stuff. So get up, get out and contemplate your sanity at this wonderfully creative and entertaining production. 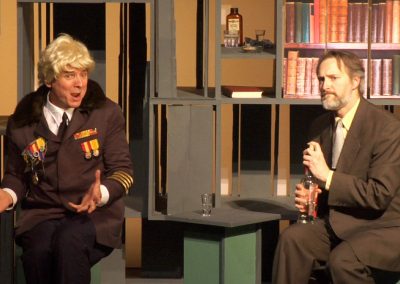 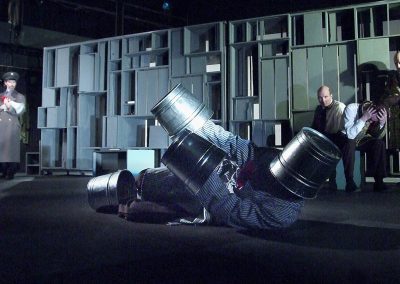 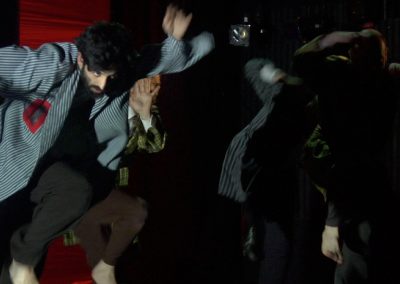 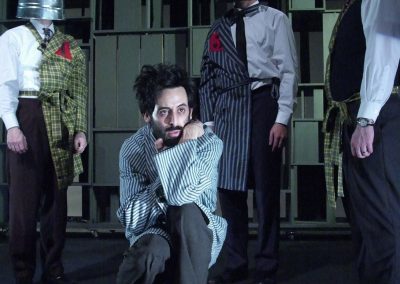 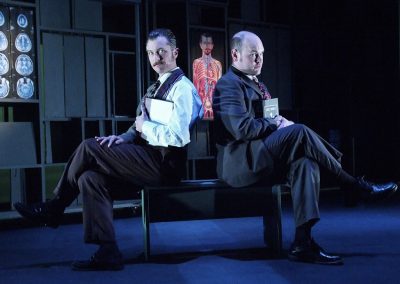 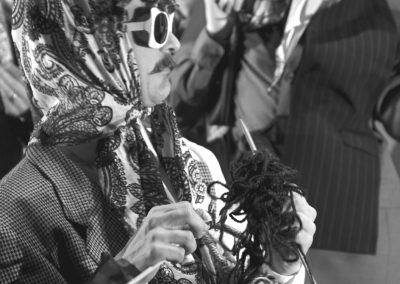 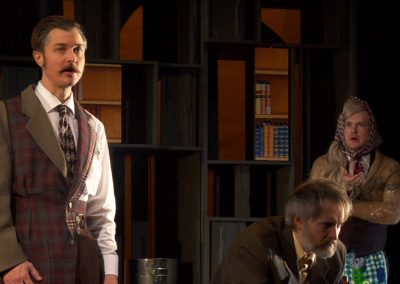 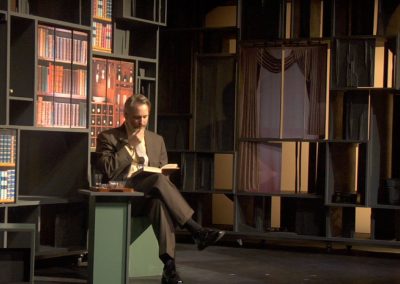 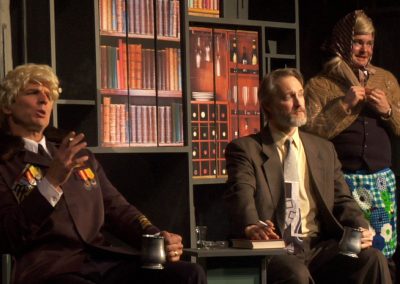 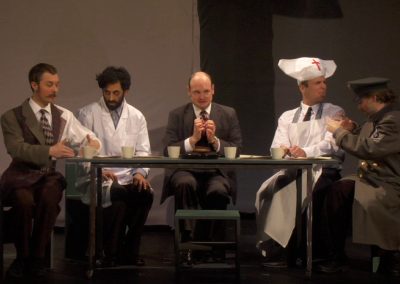