Theatre Movement Bazaar investigates Chekhov’s famous play, Three Sisters. In this new work, the characters are stranded, waiting and wanting something outside of themselves to give them happiness. They are on the modern hero’s journey, not to Moscow, as they hoped, but a journey within. Movement, dance, song and humor derail the play from its Victorian origins and set the itinerary for a twenty-first century existential extravaganza.

Poster and Flyer designs will be available to download soon.

Conceived by the imaginative team of Tina Kronis and Richard Alger, and performed by members of the Theatre Movement Bazaar, Track 3 is a hilariously brilliant adaptation of Chekhov’s Three Sisters. It is a delight to anyone with a passing knowledge of Chekhov’s plays, but even those who remember little of Chekhov will be laughing at the sheer hilarity and inventiveness of this production.

Using a mélange of choreography, vaudeville gags and gestures, and a pinch of commedia dell’arte, the company not only spoofs the mock seriousness surrounding Chekhov’s work (which, truth be known, the playwright himself never intended), but also manages to plumb the more profound depths of Chekhov’s message about the human condition. The production is a tour de force by a company that has been laboring in the vineyards of LA theater for more than a decade.

The writing is outstanding – Alger’s text sparkles with witty dialogue and zingers while still evoking the pathos of each character. And the direction and choreography by Kronis is both broadly humorous and elegant at the same time. The team has not simply caricatured Chekhov’s characters, they have reduced them to their essential qualities that burn with truth.

The performances are outstanding. Caitlyn Conlin is a sheer delight as the tortured Irina, and Dylan Jones and Kendra Chell are excellent as Masha and Olga. Mark Skeens is a witty and wonderful Andrei, and David LM McIntyre, Jesse Myers and Mark Doerr are terrifically funny in supporting roles. Special kudos to Elizabeth Vital as the darkly ditsy Natasha.

Theatre Movement Bazaar is a gem in the LA theatrical scene, and has made a splash internationally, having recently returned from performances of Track 3 in London and Edinburgh. This is a company worth both watching and supporting as its reputation spreads beyond Southern California.

The Stage ‘Must See!’

Theatre Movement Bazaar, the American physical theatre troupe behind the acclaimed Anton’s Uncles, an adaptation of Chekhov’s Uncle Vanya, turn their attention to the Three Sisters with their lively new production. The piece criss-crosses song, dance, and comedy, blitzing Chekhov’s original while remaining faithful to the essence of the play.

There’s some dazzling sequences of movement and music; the company working as a tight unit, infusing everything with vibrancy and humour and yet still managing to capture that sense of stagnation and yearning. It’s always there, beneath the dancing, like a shadow, like a sigh.
Tina Kronis’ production is fast-paced, funny and visually and physically inventive, if a little lacking in tonal variety – it can feel a little relentless at times. But there’s real wit in its details, in its mixing of the contemporary with the Chekhovian.

Caitlyn Conlin, Dylan Jones and Kendra Chell work well together as Irina, Masha and Olga, their heads piled with wigs and furs like walking wedding cakes. The rest of the cast are equally strong, with individual characters emerging from the ensemble, and while the piece can feel a little overbearing in places, it’s incredibly well executed: slick and dizzying. 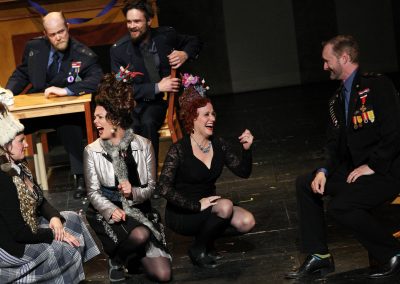 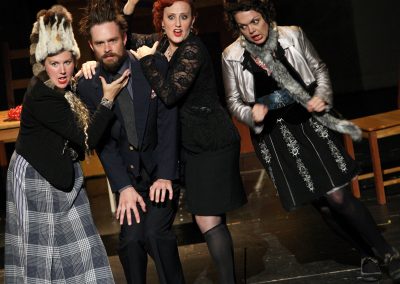